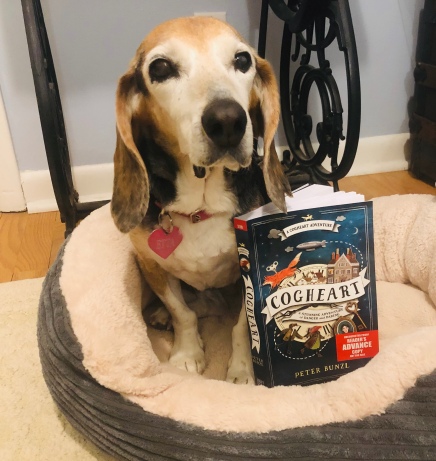 Beagles and Books is excited to share a review for Cogheart by Peter Benzl. Special thanks to Jolly Fish Publishing and Barbara Fisch of Blue Slip Media for sending me a copy in exchange for an honest review. All opinions are my own.

Some secrets change the world in a heartbeat.

Lily’s life is in mortal peril. Her father is missing and now silver-eyed men stalk her through the shadows. What could they want from her? With her friends—Robert, the clockmaker’s son, and Malkin, her mechanical fox—Lily is plunged into a murky and menacing world. Too soon Lily realizes that those she holds dear may be the very ones to break her heart …

Cogheart tells the story of Lily, a student at Miss Octavia Scrimshaw’s Finishing Academy for Young Ladies.  Posture class and French conversation lessons are not Lily’s cup of tea and while she may have frustrated a number of her governesses, she still can’t understand why her inventor father, John Hartman send her to boarding school under a false surname.
As the story quickly unfolds, Lily discovers that her father is missing after his airship crashed.  Since he is presumed dead, Lily is plucked out of school by her father’s housekeeper who Lily knows cannot be trusted.  Determined to find her father, Lily puts her trust in Robert, the son of a town clockmaker who with his father’s help repairs Malkin, Lily’s mechanical fox after he was injured.  Created by her father, Malkin shares his account of what happened on the airship the night John Hartman disappeared. As she, Robert, and Malkin navigate Victorian London thwarting off dastardly villains and attempt to uncover the truth, Lily discovers family secrets that could endanger Robert’s and her lives.
Cogheart is a book I wished I had read when I was a kid.  With dynamic characters, a fast paced intriguing plot, and an enchanting steampunk setting, I was quickly immersed in Lily and Robert’s world.  While Lily’s quest to find out the truth was riveting, I was equally drawn to Robert who initially lacked confidence in himself and a dreadful fear of heights.  Due to his kindness and loyalty to Lily, Robert realizes that his father Thaddeus was right, for while is true that ”no one conquers fear easily, it takes a brave heart to win great battles.” Cogheart is a story about family, friendship, and finding out who you really are.
First published in the UK in 2016, Cogheart is the first novel in the trilogy.  Thankful to Jolly Fish Press for purchasing the American rights to this thrilling series.  I am anxiously anticipating more adventures with Lily and Robert in Book 2 Moonlocket, which will be released in Fall 2019 and Book 3 Sky Circus in Spring 2020.

With great style and panache, the novel deftly winds through the intricacies of friendship and moral choice while maintaining a fun edge.” —Publishers Weekly
“An exciting, fast-paced adventure.”  —Booklist
“Introduces dastardly villains, friendly mechanicals, and thrilling airship action. . . . with hair-raising and cinematic charm.” —Kirkus Reviews
View the book trailer below and click here to download activities, discussion guides and much more!

About the Author:
Peter Bunzl grew up in London and lives there with his partner Michael. He is a BAFTA-award-winning animator, as well as a writer and filmmaker. To learn more, visit his website, peterbunzl.com or follow him on Twitter @peterbunzl or Instagram @peter_bunzl

3 thoughts on “Review & Giveaway for Cogheart by Peter Benzl”