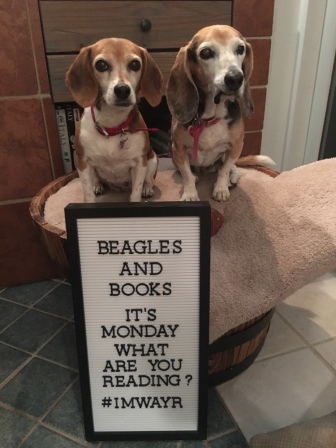 Beagles and Books is excited to share our recent reads in It’s Monday! What Are You Reading? #IMWAYR is a community of bloggers who link up to share what they are reading. Kellee Moye of Unleashing Readers and Jen Vincent of Teach Mentor Texts decided to give it a #kidlit focus and encourage everyone who participates to visit at least 3 of the other #kidlit book bloggers that link up and leave comments for them.

The World Ends in April by Stacy McAnulty

Elle is probably the only student in her middle school who has a bug-out bag (otherwise know as BOB)? Why? Because Elle’s grandfather is a prepper or in plain speak, he has been preparing for her and her brothers for the apocalypse ever since she can remember.  Just when Elle is officially tired of her grandfather’s favorite hobby, she stumbles upon the website of Dr. Martin Cologne, an Ivy League astrophysicist who unequivocally believes that an asteroid will cause the world to end in April.  Confiding in her best friend Mack, they start an TEOTWAWKI (The End Of The World As We Know It) club, which is formally known at school as the Nature Club in order to not raise suspicions.  But while the other members including Mack take the prediction in stride, Elle becomes totally obsessed with Dr. Cologne’s prophecy which causes trouble at school and at home.

The World Ends in April has a unique plot but I believe it is Elle that will hook readers. Written from her point of view, Ellen is such a dynamic character and while strong, McAnulty also allows readers to see her vulnerabilities. Elle learns that true friends and family will always be there for you. And believing in TEOTWAWKI can actually change you for the better. Special thanks to Random House Kids for sharing an ARC with my #bookexcursion group.  Look for The World Ends in April’s release soon on September 3, 2019.

A Swirl of Ocean by Melissa Sarno

For most of her life, 12 year old Summer has enjoyed a quiet life with her adoptive mom Lindy in the beach town of Barnes Bluff.  But their family of two is about to change with Lindy’s boyfriend, Elder moving in.  Worried she is being replaced by Elder, Summer starts to question who she really is and does she really belong with Lindy, for Lindy found Summer on the beach when she was two.  Then after getting caught in riptide, Summer starts to have vivid dreams about a girl named Tink and her friends.  Like Summer, Tink is dealing with feelings of insecurity.  With her best friend Jeremiah, Summer tries to find answers about Tink which ultimately will help Summer discover more about own her identity as well as Lindy’s.

Author Melissa Sarno seamlessly and beautifully intertwines themes of change, friendship, family, and identity in this intriguing upper middle grade novel.  A blend of realistic fiction, fantasy and mystery, A Swirl of Ocean’s captivating plot will draw readers in and only 217 pages long, it is a story that is hard to put down.  Special thanks to author Melissa Sarno for sharing an ARC with my #bookexcursion group.  A Swirl of Ocean recently published on August 6, 2019.

Cape: The League of Secret Heroes by Kate Hannigan Illustrated by Patrick Spaziante

A blend of historical fiction and fantasy, CAPE is a fast paced adventure that middle grade readers will devour. Set during World War II, readers are introduced to three astute and diverse young girls, Josie, Akiko, and Mae who are recruited to join a league of secret heroes to fight injustice. There are so many reasons I enjoyed reading CAPE.  Hannigan’s unique plot makes the novel a page turner. While CAPE is undoubtedly fiction, Hannigan intertwines real life elements of the period such as the discrimination that particular ethnic groups faced during World War II as well as characters based on actual people who supported the war effort like Josie’s cousin Kay who worked as a human computer during the war. I absolutely love the camaraderie between Josie, Akiko, and Mae.  Interspersed throughout the novel are Patrick Spaziante’s incredibly illustrated comic panel sequences which depict the girls’ transformation into superheroes and their fight against evil, which will make the novel even more appealing to readers.  To read my full review, click here. 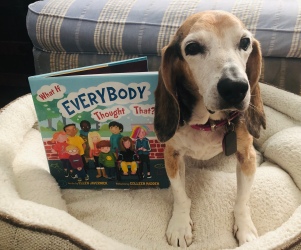 What If Everybody Thought That? by written by Ellen Javernick Illustrated by Colleen Madden

Everyone has thoughts about us that we never hear.  These preconceived opinions are based on our stature or appearance and while never vocalized, silence and body language can still affect our self-esteem.  Rather than dwell on these negative thoughts, we should believe in our abilities and show them that they are wrong.  What If Everybody Thought That? does more than just foster inner confidence.  The story has a higher goal of challenging children to stop making negative assumptions.  For example, instead of presuming that individuals who are short can’t excel at basketball, we should not form an opinion before seeing them on the court. To read my full review and enter a giveaway for all 3 books in the What if Everybody series, click here.

Etta’s and Bella’s Dog Pick of the Week:

The Grumpy Pets by Kristine Lombardi

August 17th was Clear the Shelters Day.  Thanks to an Instagram post by author/illustrator Kristine Lombardi, I discovered a “new to me” book that promotes animal adoption.

Billy is a grouchy kid who finds it hard to smile. In hopes of cheering him up, his mom takes him to Perfect Pets Animal Shelter.  Everyone including his sister finds a pet that suits them except for Billy.  They are all just too perfect. But when Billy hears barks coming from another aisle, he discovers to his surprise, the grumpy pets, which had similar dispositions to Billy.  Within moments, Billy makes eye contact with one particular dog which ultimately helps turns his frown upside down.

With concise text and expressive illustrations, The Grumpy Pets is a story that teaches readers that animals can rescue us from a bad mood with just one look, lick or tail wag. And as a dog mom of 2 rescue beagles, I love that the Lombardi promotes visiting a shelter or rescue to adopt your furever friend.

Etta, Bella & I thank you for visiting Beagles and Books. Happy Reading!