Beagles and Books wishes a very Happy Book Birthday to We Could Be Heroes by Margaret Finnegan!  So excited that readers will get to finally meet Hank, Maisie and Booler.

It is no secret that I love books that feature dogs as a main character. From the moment I saw the cover and read the synopsis of We Could Be Heroes, I couldn’t wait to read it. I was blessed to win a autographed bound manuscript in Good Reads with Ronna’s Twitter giveaway. 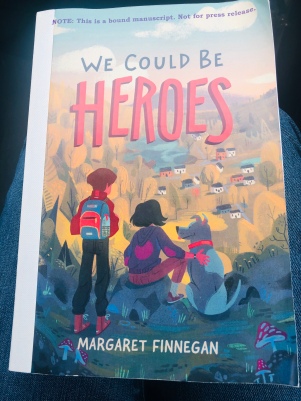 Then a few months later, I received an ARC from Barbara Fisch of Blue Slip Media. I took the opportunity to re-read the novel and fell in love with the characters and the story even more.

Fourth grader Hank is a compassionate kid with autism.  He is largely overlooked by his classmates, but Hank is content spending time with his rock collection.  After an incident at school which leads to a three day suspension, Hank gains the attention of high-spirited classmate Maisie.  And coincidentally, her parents are geologists. Maisie invites Hank over to her house to see rocks but actually has an ulterior motive. She wants to find a new home for her neighbor’s dog, Booler.  Booler suffers from seizures; therefore, in order to keep the dog safe, Booler lives outside tied to a tree.  From Maisie’s perspective, Booler is being mistreated and needs to be rescued, but Maisie doesn’t know the whole story.  Hank is eager to have a friend, but experiences anxiety for Booler and his situation.  Maisie though is so relentless that Hank refers to her as a barnacle, for she has latched on to a plan to save Booler and won’t let it go.  Reluctantly, Hank agrees to help Maisie and while their intentions are admirable, their actions do result in some negative consequences, but fortunately, there is a silver lining, for Hank and Maisie both learn how to be a true friend.

I read a lot of middle grade novels and many are written with older characters.  I love that debut author Finnegan’s novel features two dynamic characters for a younger audience.  Drawing from her own experiences as a parent of a child with autism and epilepsy, Finnegan also did a beautiful job creating authentic characters in Hank and Maisie.  While the novel is under 250 pages, Finnegan slowly and skillfully reveals the plot which makes the novel hard to put down.  Readers do not learn until close to the end why Maisie is so steadfast in wanting to rescue Booler.  I also love how the friendship between the children and Mr. Jorgensen gradually unfolds.  With themes of family, friendship, and forgiveness, We Could Be Heroes is a must read.  Pre-order now, for the novel publishes on February 25, 2020.