Mott (short for Martha) just moved to California from Pennsylvania with her mom.  The transition isn’t easy, for she is missing her best friend and disappointed in her dad who doesn’t keep his promises.  One night, behind her apartment, she hears a “mweep” coming from a recycling bin.  Thinking it is a rat, Mott is delighted to discover the sound was coming from a puppy.  Angered that someone would dump a defenseless pup, Mott promises to take care of it.  This vow is tricky since her apartment building isn’t pet friendly.  But Mott is a quick thinker and takes the dog to an animal shelter where she finds out the animal is actually a wolf pup.

The wolf pup doesn’t appreciate being leashed and escapes. When Mott catches up with him, the wolf pup is being held by a large man dressed in a costume who introduces himself as Gorm the Vicious., a bondsman to a Norse god. He informs Mott that the wolf pup is Fenris and according to Norse mythology, he will destroy the world by eating the moon. Mott might not have control over a lot of things in her life, but she is determined to keep her vow to Fenris.  After meeting Fenris’ sword bearing guard, Thrudi and refusing to surrender him, Mott convinces her to team up to attempt to stop the prophecy in hopes of saving both Fenris and the world.

Told from Mott’s point of view, Fenris & Mott is a fast-paced, riveting story that is hard to put down.  To be honest, I don’t read a lot of novels with mythological elements.  Initially, the wolf pup drew me in but what made me keep reading was Mott.   She is strong for Fenris willing to protect him at all costs yet vulnerable when it comes to relationships with Amanda and her dad.  What I also enjoyed the humor especially between Mott and Thrudi and their unlikely friendship.  While some plot events are tied up, there are still questions left unanswered which leaves me hopeful that the trio’s adventures will continue. Thanks to Barbara Fisch of Blue Slip Media for sharing a copy.  Fenris & Mott releases next week on August 2, 2022.

The End by John Bray

In his debut picture book, Bray humorously explores the concept of endings.  On the first page spread, a child is running excitedly out of a school building where a hanging banner states “Have a great summer.”  The child finishes lunch but dinner and dessert will be beginning.  Later she builds a very long fort which allows her to stay in the middle until she gets bored ending her construction. As I read The End, I was reminded of the Lucius Anneaus Seneca quote popularized in Semisonic’s song Closing Time, “Every new beginning comes from some other beginning’s end.”

Bray’s playful text and Cleland’s energetic artwork make you want to read the story to the end!      After reading, a good discussion can take place about beginnings, middles, and endings and how some conclusions are tougher than others such as the end of summer vacation (yup, that is a BIG ending).  Thanks to Starry Forest Books for sending an ARC to my #bookexcursion group. The End releases on August 30, 2022. 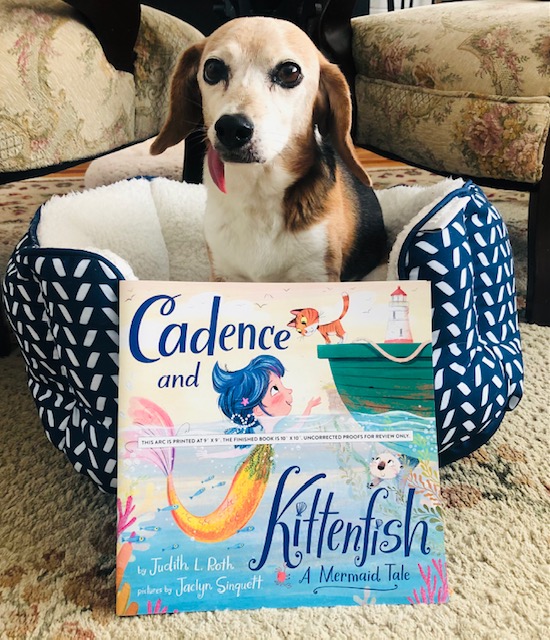 Cadence and Kittenfish: A Mermaid Tale by Judith Roth Illustrated by Jaclyn Sinquett

Cadence, a young mermaid, is lonely.  When she peers up on land and sees a whole bunch of kittens, she thinks one would be a great companion.  Her dad disagrees suggesting a catfish. But Cadence still wants a kitten. The next day, Cadence returns above water in a boat and is able to entice a kitten to join her. But finding a place they can both play is problematic since cats live on land and mermaids in the water. After many unsuccessful tries, Cadence sadly says goodbye to the kitten returning it to shore. Will Cadence ever find a pet that fits her and her habitat?

With a lively text and expressive illustrations, kids will enjoy Cadence and the Kittenfish.  They will also easily be able to relate to Cadence and her desire for a pet of her own.  And don’t worry.  Astute observers will see that Cadence’s perfect pet is right under her nose (I mean tail),  for the most adorable little otter seems to be following her longing for a friend too.  Thanks to Starry Forest Books for sending an ARC to my #bookexcursion group. Cadence and Kittenfish releases on August 30, 2022.

Wanting to spread the dog love, Beagles and Books has a weekly feature of highlighting a literary selection with a canine character.

Full disclosure: I did not know about Noodles because I am not on TikTok.  But I just discovered he is on Instagram so he and his human each gained a new follower.

Noodles, a senior rescue pug, enjoys walking and sitting outside with his human Jonathan, And snacks. Noodles loves eating snacks. But one morning, Noodles didn’t want to leave his comfy bed.  A worried Jonathan tried to get Noodles upright, but he just fell back in his bed as if he did not have any bones.  After checking to make sure Noodles was not sick, he decided to let Noodles relax at home with belly rubs, snuggles, and snacks. Always snacks. It was Noodles first of many no bones days!

Being a senior rescue dog mom, Jonathan Graziano and Noodles touched my heart.  My husband and I adopted both Bella and Etta (who passed in February 2020) when they were each about six years old.  Dan Tavis’ illustrations capture Noodles’ adorable personality and I appreciate how the author’s note encourages readers to look to shelters and rescues to find a pet. I also love the message in the story that bones or no bones are both good days. Why?  Because any day you can spend with someone you love is a fantastic day!  Some of my favorite days are chilling with Bella on a snow day or during summer vacation.  In a world where schedules can get busy, Noodles and the No Bones Day is a great reminder to practice self-care.  Thanks to Simon Kids for sharing a copy.  Noodle and the No Bones Day published on June 7, 2022.