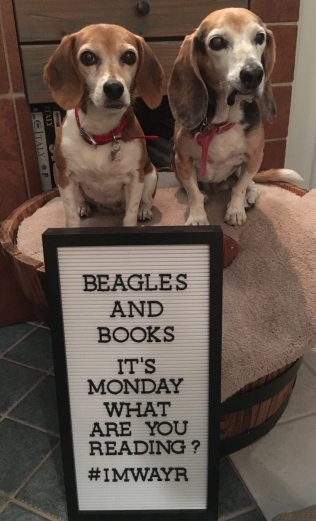 Beagles and Books is excited to share another edition of It’s Monday! What Are You Reading? #IMWAYR is a community of bloggers who link up to share what they are reading. Kellee Moye of Unleashing Readers and Jen Vincent of Teach Mentor Texts decided to give it a #kidlit focus and encourage everyone who participates to visit at least 3 of the other #kidlit book bloggers that link up and leave comments for them.

It’s a snow day for me which means a day of reading and snuggling with my book beagles!  I truly love my job but a snow day helps this educator have an opportunity to read and recharge which is always appreciated!  Yesterday Bella and I enjoyed a walk in the snow while Etta snoozed in the warm house.  Priorities! 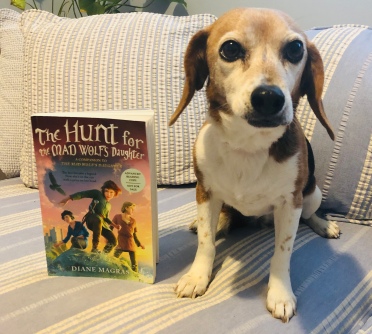 The Hunt for the Mad Wolf’s Daughter by Diane Magras

As a reader, I love sequels but there is always that slight worry before opening the first page.  Will I still love the character?  Will the plot be as engaging?

Oh yes!  And even better than I could have ever anticipated! Thank you Diane Magras!

In the first book, The Mad Wolf’s Daughter, Drest’s main goal was to save her imprisoned family which she bravely accomplished.  She was also struggling to figure out her own identity. Can a warrior be brave and kind?

The Hunt for Mad Wolf’s Daughter picks up immediately after the first book ended. Readers quickly learn that Emmerick’s disloyal uncle has spread false rumors that Drest is responsible for the young lord’s death.  As a result, Drest has a substantial price of her head.  While her family lauds Drest’s courage in rescuing them, she is once again relegated to the sidelines by her father Mad Wolf.  To no surprise, this does not sit well with Drest.  She remains steadfast in her determination to keep Emmerick safe disobeying her father’s orders and risking her own life to ensure Emmerick reclaims his rightful title.

The Hunt for Mad Wolf’s Daughter is a fast paced and thrilling ride that keeps you on the edge of your seats chapter after chapter.  In creating Drest, Diane Magras has created a truly amazing character and role model for readers of all ages.  Drest truly inspires me with her genuine compassion toward others as well as her determination to carve her own path & define who she is, not who others want her to be.  While it may be true that you can’t control our own legend, Drest learns it is possible to change your legend with the help of grateful and loyal friends.  It is my hope that Drest’s adventures do not end with The Hunt for Mad Wolf’s Daughter; I know I can learn so such more from this kind and brave wee lass!

A very special thanks to Diane Magras for providing our #bookexcursion group with an ARC of The Hunt for Mad Wolf’s Daughter.  Pre-order now for Drest’s latest adventure publishes in March.  To read my review of The Mad Wolf’s Daughter, click here.

First Snow is a delightful picture book that celebrates the joy of the first snow of the season.  A brother and his little sister look out the window to see snow falling.  The children waste no time putting on their snow gear and head outside to join their neighborhood friends to play in the wintry wonderland.  Their beagle (yes beagle!) follows along to frolic in the snow!  To read my full review and enter a giveaway for your own copy, click here. 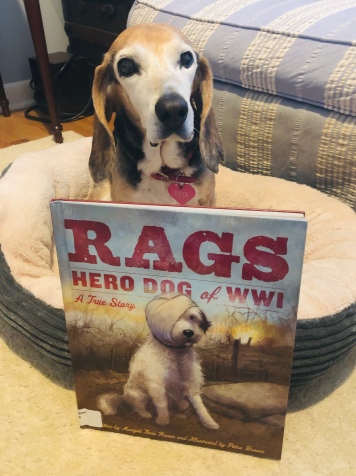 This nonfiction narrative introduced me to two heroic war veterans.  Found by Private James Donovan on the streets of Paris, a shaggy mutt becomes his good luck charm when the soldier forgets his pass to be out in the city and is stopped by the French police.  From that day forward, the pup now named Rags is Donovan’s constant companion on base and in the trenches.  Rags quickly learns how to be a soldier warning his men of incoming shells, helping Donovan locate breaks in the lines, and running messages with the simple command “Go find!”

Author Morgan Theis Raven continues to share both Donovan’s and Rags’ amazingly heroic story which is both heartwarming and heartbreaking.  The muted brown and grey illustrations complement the story well depicting the realities of war for an elementary age audience.

Etta, Bella, and I thank you for visiting Beagles and Books.  Have a great week!