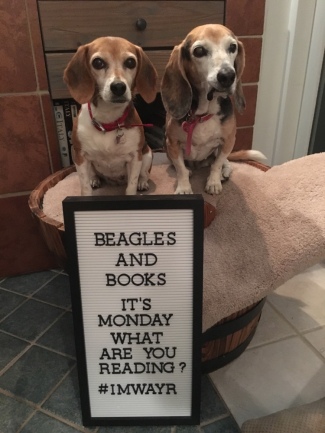 Beagles and Books is excited to share our latest reads in It’s Monday! What Are You Reading? #IMWAYR is a community of bloggers who link up to share what they are reading. Kellee Moye of Unleashing Readers and Jen Vincent of Teach Mentor Texts decided to give it a #kidlit focus and encourage everyone who participates to visit at least 3 of the other #kidlit book bloggers that link up and leave comments for them.link up below, leave a comment, and support other IMWAYR bloggers by visiting and commenting on at least three of the other linked blogs. 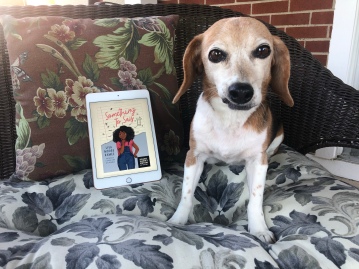 Something to Say by Lisa Moore Ramée

Seventh grader Janae is not about fitting in at her middle school. She actually prefers to be invisible.  But when Aubrey, a new student who shares a love of YouTube show, Astrid Dane, befriends Janie, blending in is not so easy.  Outgoing Aubrey is the complete opposite of Janae so she wonders why he wants to be her friend as well as debate partner in English class.  Public speaking is one of Janae’s greatest fears; in contrast, Aubrey is elated to debate a timely community issue-changing the name of their junior high school from John Wayne to honor Sylvia Mendez, a young Mexican-American girl who help successfully integrate California schools.  Janae becomes really interested in learning more about Sylvia but her feelings on public speaking remain unchanged.  Will Janae risk her new friendship with Aubrey and stay silent or will be willing to speak up for herself to not only save her friendship but also champion Sylvia for her bravery?

Written from Janae’s point of view, readers get to truly witness her inner struggles and my heart hurt for her.  While Janae initially tried to distance herself from Aubrey, I loved how she gradually began to enjoy and look forward to Aubrey’s company. This awareness made her decision making more difficult and the novel more exciting to read.  Janae learns that while friendship can be messy and hard, it is also “sway” (good) and “del” (delicious). Thanks to Harper Collins and Edelweiss for sharing an eARC.  Something to Say celebrates its book birthday this week on July 14, 2020.

Malia is excited to spend the summer with her Aunt Lucy in the cool Little Mexico neighborhood of Gulf City,  but she is not as thrilled that her cousins Ivan and Dante were there too.  As they make their way to the neighborhood water park, Malia decides she is in charge.  After all, she is the oldest by two months.  While on 11th Street, they meet an old woman who tells them of a shortcut down an alley. Everything becomes dark and quiet and the cousins discover they have missed 12th Street and are now on 13th Street. And to make matters worse, the trio encounter bats with incredibly awful breath.  Will Malia, Ivan, and Dante be able to band together to successfully battle the bats and make it back home?

As a reading specialist, I was already a fan of the new illustrated Harper Chapters series, for each book includes supports such as end of the chapter progress bars and full and half page illustrations for students transitioning to chapter books.  Kids will devour the 13th Street series because of its engaging characters and scary, fast paced plot.  I also love how #ownvoices author Bowles exposes readers to Spanish through not only dialogue but also after readers complete milestones as saying Chido! for reading 4 chapters. Special thanks to the publisher Harper Collins for sharing an ARC of 13th Street #1 at the NCTE convention. In addition to Battle of the Bad–Breath Bats, the next two books in the series, The Fire-Breathing Ferret Fiasco and Clash of the Cackling Cougars recently published on July 7, 2020.

Lulu, The One and Only by Lynette Mawhinney Illustrated by Jennie Poh

Lulu, The One and Only is a powerful story to begin the conversation about race with young children. Lulu is a proud and confident biracial young girl but she is confused and sensitive because people keep asking her “What are you?” Written from Lulu’s point of view, she honestly shares some of the questions people ask her which are very hurtful.

While I have read a lot of picture books that discuss identity and self acceptance, Lulu, The One and Only is the first picture book that provides mixed-race children with a tool to help them navigate their emotions and responses when asked inconsiderate questions.  Lulu’s story is also a valuable resource for making young children understand what microaggressions are and to discuss how these statements were hurtful to Lulu and Zane. To read my full review and enter a giveaway, click here.

Thinker: My Puppy Poet and Me by Eloise Greenfield Ilustrated by Eshan Abdollahi

If you are looking for a book to introduce novels in verse, look no further than Thinker: My Puppy Poet and Me, a collection of 16 poems told from mostly the dog’s point of view.  In the first poem, Naming Me, the dog explains why his owner Jace named him Thinker, for he like Jace is a poet and wants a deep, not cute name.  At home, Thinker and Jace are the perfect match communicating in free verse but on Pets’ Day at school. Jace is worried how others will react to Thinker’s gift of words and ask Thinker to follow the rule of “no poems, no talk.” Can Thinker be himself by only watching, thinking and barking? Through her poetry, Greenfield beautifully conveys both Jace’s and Thinker’s feelings.  Jace’s initial anxiety turns to pride when he realizes Thinker needs to be his true self.  Abdollahi’s warm collage illustrations complement the verses well and provide support if sharing this novel with younger readers.

Bella & I thank you for visiting Beagles and Books. Happy Reading!